Tomorrow, 350 CUNY science advocates across 10 campuses will be marching for science! Over 30,000 people have registered for March for Science NYC, joining over 500 cities around the world to celebrate and defend publicly-funded science for the common good.

At 9:30am, more than 150 of us will meet at Macaulay Honors College (35 W 67th St.) to grab snacks, coffee, and make some last-minute signs. At 10am, we will swing up to Verdi Square to meet a group of 100-150 from Queens College*. Together, we will enter the march at 71st & Columbus Ave, moving South on Central Park West to the rally stage at 62nd. You will not be able to enter the march except at 64th, 68th, & 71st**. The 64th and 68th St. entrances will be closed once Central Park West fills up at each of these streets. You will not be able to enter the march from Central Park (exit into Central Park is permitted, but not re-entry). Marchers will be lined up along Central Park West from 61st stretching north.
At 11:30am, the march will begin at 61st St, heading South along the East side of Columbus Circle, and down Broadway towards 52nd St. As the march approaches 52nd street, groups will be directed so that the march disperses without causing a bottleneck for those behind them. Marchers will be encouraged to join the City’s Earth Day celebration with Car Free NYC.

Please follow @CUNYWomeninSTEM on Twitter, where we will be sharing our most up-to-date info. I will look for tweets tagged #M4SNYC to retweet.
Thanks to the DSC and USS for their support, and Kelly O’Donnell at Macaulay for offering to host us!

* Baruch College has been instructed to meet at 60th & Central Park West and will enter the march separately.

** those with mobility issues can enter at 61st & Broadway, email jill@marchforscience.nyc to arrange accessibility accommodations.

Kelly O’Donnell, the Director at Science Forward at Macaulay Honors College has graciously offered to host the launching pad for all CUNY folks, groups and friends who want to March for Science together. We will meet at Macaulay at 9:30am. RSVP as we would like to provide some grab-and-go snacks sponsored by the DSC and USS. Here is a map of our meeting point, likely route to enter the march, and path of the march. If you have any special needs, such as accessibility accommodations, please send an email to mfsnyc.march@gmail.com. Follow @CUNYWomeninSTEM on Twitter for updates about our CUNY group. Please mention us when you are tweeting about #M4SNYC!

The above is for those who want to march with CUNY. Please check the official March for Science NYC‘s communication channels for the most up-to-date march information. A custom eBook search engine created by ManWithoutModem on Reddit*.

To convert eBooks to other formats, Calibre is free and fairly easy to use.

**Please be sure you have registered below. The building is open, but we will be in an area that requires you check in with security, and show a valid form of ID**

Data Anywhere Workshop: participants will learn how to configure and secure a UNIX server for hosting open (or private) data sets. Step-by-step instructions will be provided for installing a variety of software packages and participants will become familiar with web applications such as nginx, mongodb, and flask. Also, we’ll be covering a bit of Python, and covering some basics of nosql.

More info on Data Anywhere can be found on occupydatanyc.org

Register by submitting the form here.

To celebrate the many great achievements of members this year, Annelies, out very kind alumni member hosted a tea party in the lovely Brookhaven, LI. 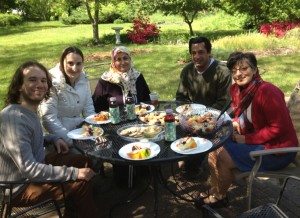 To receive announcements about events, join us on the GC Commons.